The growth of blockchain and blockchain applications has created many opportunities to earn yield, which vary greatly in magnitude, duration, and risk. While yield farmers seek out the highest yields while they last, institutional investors seek reliable yields. This article asserts that yield from staking offers institutional investors what crypto-yield sources cannot — certainty, longevity, and scalability.

The nature of blockchain creates many sources of yield

Blockchain functions because everyone plays their part, and everyone plays their part because they are incentivized to do so. People’s use of blockchain networks is enabled by the activities of others, who earn a reward in the process. Let’s refer to the reward-earners as “Alice”, and the network users as "Bob". Today there are more opportunities than ever for Alice to support the blockchain and earn a yield — let's examine these yield opportunities, and assess their risk, return, and stability.

The yield from decentralized finance (DeFi) applications, which run on top of blockchains like Ethereum, have different requirements and incentives for Alice. For example, for a decentralized exchange (DEX) to support Bob’s buying and selling, Alice locks up her assets in a liquidity pool and earns trading fees.

The yields keep fluctuating as the demand changes for trading those particular assets, making the process of finding yield tricky. As assets rise and fall in popularity, Alice will have to move her capital from one pool of assets to another to earn attractive rates. This process is called yield farming.

The risk here is smart contract risk, where an exploit might allow a hacker to steal funds from the protocol. These protocols are complex software performing novel functions in a relatively untested environment, written by teams often lacking the expertise to employ robust development practices. Exploits have allowed hackers to steal $285m via thefts in DeFi platforms, either via finding exploits in the protocol’s code or otherwise manipulating the assets on the periphery to achieve an unexpected behavior from the protocol.

A straightforward source of yield is from lending assets, where Alice is paid interest for allowing Bob to take out loans. Lenders contribute to a “pool” which borrowers can borrow from, and the interest rate is set algorithmically depending on the balance of borrowing and lending. Loans are collateralized, and the protocol liquidates borrowers whose debt becomes equal to the amount of collateral they’ve put up.

Interest rates for the USDC stablecoin at Aave. The big swings create uncertainty for both borrowers and lenders. Source: Aave

Like the yield from earning trading fees, returns from lending are good but vary significantly, depending on the changing demand for loans. Again, Alice will likely engage in yield farming to continuously earn attractive yields.

The risk faced by a lender, like on other decentralized applications, is protocol risk, making the protocol vulnerable to theft. Because all the lendings are collateralized, there is no credit risk, but lenders rely on the protocol to liquidate borrowers before they become bankrupt. Should the price of an asset suffer a liquidity crisis or stablecoin lose its peg, lending protocols may begin liquidating positions that were otherwise properly overcollateralized. (This happened in November 2020, when DAI reached $1.30 on Coinbase, triggering over $88m in liquidations on Compound protocol).

The first-ever opportunity for Alice was Bitcoin mining, whereby she would perform the computation to assert the validity of blockchain transactions via Proof of Work. For each block of transactions verified, she earned some newly created bitcoin. Today, bitcoin mining generates millions of dollars daily and has spawned several publicly traded companies.

The profitability of a miner depends on the electricity cost, machine efficiency, the amount of mining, and the price of bitcoin in the marketplace. Mining can be a profitable business, but that profitability changes over time, according to these factors. Today, entering the mining business requires high capital expenditures and is not without risk.

More modern blockchains no longer rely on Proof of Work to verify transactions. Proof of Stake has become the dominant method for verifying transactions. As explained in a previous blog post, Alice can put her blockchain tokens “at stake” to assert the validity of blockchain transactions, earning a reward of newly created tokens in the process. This removes the high capital expenditure required to enter the mining business, allowing investors of any size to earn a yield on their blockchain tokens. 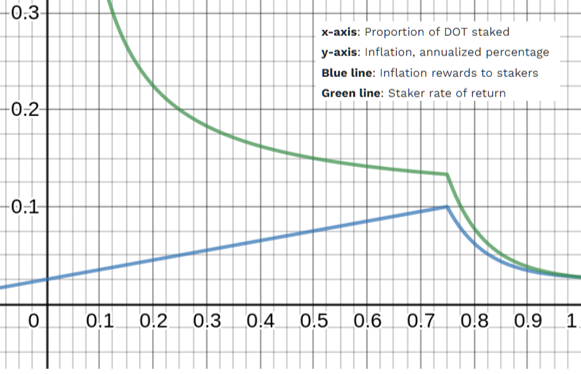 As described in Polkadot’s documentation, the rate of return to stakers (green line) depends on the proportion of DOT being staked (x-axis). The worst-case rate of return for stakers exists when 100% of DOT is staked. Source: Polkadot

The yield varies from blockchain to blockchain, with stakers currently earning an average real yield of 6.4% (Source: Staked). The staking rate adjusts to either incentivize or disincentivize token-holders from staking. This is to ensure that a certain percentage of the total supply of tokens is staked — too few tokens being staked endangers the network security, while too many means that people are holding instead of trading. As shown in the graphic, the target percentage for Polkadot is 75% — if less than 75% of the supply is on stake, the yield rate increases, and if too many tokens are staked, the yield rate decreases. (Note that Alice will also receive some small, additional income from transaction fees paid by the users like Bob).

The only risk of loss associated with staking is in the event of slashing. If the staking infrastructure is running poorly or attempts are made to insert malicious transactions into the blockchain, the network charges a slashing penalty. However, working with third-party validators decreases the risk significantly. Figment , for example, uses Hardware Security Modules (HSM ) to secure private keys and prevent double sign faults and has multi on-premise and off-premise secure server backup and redundancy. Blockdaemon uses protocol-specific failover strategies to eliminate the risk of double-signing and is confident enough to insure any losses due to slashing. Chorus One directly works with developer teams to ensure no vulnerabilities are present in the underlying protocols. To enhance the user confidence, they are even offering $2m bug bounty for Lido for Solana.

Staking is crypto’s most reliable and scalable source of yield

As outlined above, there are several opportunities to earn yield in crypto, but it’s hard to find rates that don’t undergo large fluctuations or last for a short time. We’ve discussed in the previous section that staking yields change but will not drop below the worst-case rate — this gives investors a level of certainty that Defi yields do not offer.

In searching for a predictable, long-term source of yield in crypto, it makes sense that this could be collected in return for performing a service that blockchains will always need: helping to verify transactions. Since every blockchain needs to continuously achieve consensus to remain operational, staking yield from the new supply will continue indefinitely, regardless of the demand on that blockchain.

Additionally, staking is a scalable source of yield. Adding more capital is just a matter of buying more tokens, and staking them with validators. According to stakingrewards.com, there is already $143b locked in staking. Compare this to the $47b locked in decentralized lending, or the $30b locked in decentralized exchanges, and bringing tens of billions of dollars to staking would make much less of an impact than it would in DeFi.

While staking might sound great on paper, achieving optimal staking rates and avoiding loss requires technical expertise, which is worth discussing.

Staking is still a technical challenge

If staking gives a relatively predictable yield with indefinite duration and scales with large amounts of capital without taking on huge risks, there must be a catch. Is it just a way of printing free money?

Well, no, staking is a reward for undertaking the verification of transactions on the blockchain, which is no easy task. It requires running secure, constant up-time infrastructure, with very little room for error, making sure to adhere to the rules of the blockchain network.

Each protocol has its own rules surrounding staking, requiring validators to adapt to earn yield safely and efficiently. A few examples: Some protocols define a maximum amount of tokens that can be staked on one node, requiring validators to spin up many nodes to stake large amounts of capital. Some protocols do not compound staking rewards automatically, and some require the validator to manually stake the newly earned rewards, meaning that an investor might have to wait if they wish to remove tokens. These are a few of the issues that validators have to deal with, aside from ensuring that their infrastructure stays online always and that they never accidentally verify the same transaction twice.

These technical challenges and the requirement to lock up tokens while staked have prevented the large majority of crypto exchange-traded products (ETPs) from engaging in staking , providing investors with anytime liquidity but not the chance to counteract the supply inflation of their tokens. The limitations and opportunities in this space are becoming clear and validators are playing an ever-larger role in the crypto ecosystem.

Plenty of highly competent validators are willing to undertake the technical exercise of staking in exchange for a share of the reward. Validators stake tokens without needing to take custody of them, meaning that investors can safely earn staking rewards without moving their funds out of the custodian account.

The value that validators offer is evidenced by their growth. The first sign this year was in January when Coinbase acquired Bison Trails for around $80m. This fall, Blockdaemon, one of our partner validators, officially became a unicorn after raising a $155 series B at a $1.26b valuation. Finoa's staking partners have billions of dollars worth of digital assets being staked on their infrastructure: Blockdaemon reports on their website staking over $10b of assets, Chorus One reports staking $3.9b, and Figment reported in August staking $7b.

As institutional capital becomes more interested in the yield opportunities within crypto, asset managers will have to learn how to put their assets to work by participating in blockchain networks. Incentive mechanisms are a key tenet of crypto—yield opportunities that exist only for those willing to contribute to the health and security of the ecosystem. Due to the certainty and longevity it provides, staking may be the future of institutional yield generation in crypto. But the capital will have to work with validators to ensure that staking is happening securely and efficiently.

We are proud to work with industry-leading validators to provide our clients with an unrivaled level of transparency and choice when it comes to staking their digital assets. We’ve worked closely with blockchain developer teams and validators to ensure day-1 custody and staking support for MINA, NEAR, FLOW, ROSE, and SKL and continue to play a critical role in the success and growth of emerging PoS blockchain protocols.

NEP-141 and the projects built on the NEAR Protocol

Are professional crypto custody services worth it?